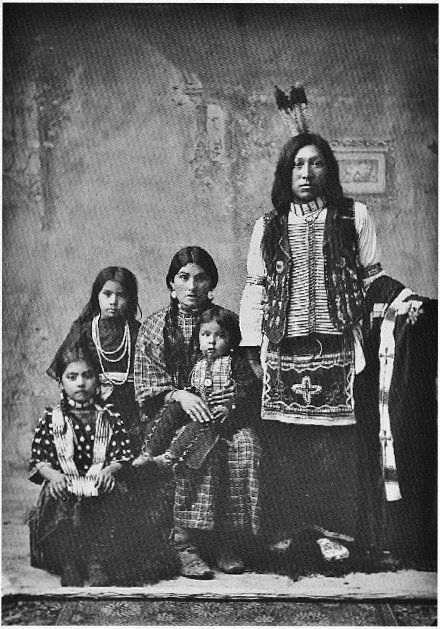 The first people to enjoy Roystone Hot Springs were the Indians.  They wintered here every year, using the hot springs for warmth and entertainment.  The warm water seeped up along the banks of the Squaw Creek, which is where they chose to set up their teepees.

The creek was very important to their lifestyle.  They set up their fish camps here to catch the homecoming salmon.  These camps were a hum of activity as these people worked to spear, smoke and dry their years’ supply of great Silvers.  Years after the Indians are gone there is still evidence of their activities.  The women built stations out of flat boards attached to logs placed in the middle of the creek.  After they caught the salmon they cleaned them there in the current, letting the stream take care of the mess.

A little further from the Squaw Creek on the hill just above where Roystone Hot Springs is today, the Indians enjoyed a favorite pastime – Mud bathing.  They had found where two of the hot springs bubbled up out of the hill into the rich dirt.  Here they formed willow branches into simple steam huts and enjoyed soaking in these muddy pools for therapy and healing.

The first white man known to have owned the Hot Springs was a German immigrant name George Croats.  A deed shows that he homesteaded the springs in 1889.  Also called George Coats, he farmed the fertile ground surrounding his mineral springs.  Known for being a “clever and industrious German,” he used the warm water for irrigation and developed a fine vegetable and fruit farm.

Above the RV Park at Roystone today a lone, century-old pear tree is all that remains of his orchard (and it nearly always boasts a fruit or two).

For a number of years, Croats made regular trips to the towns of Boise Basin to sell his d

elicious watermelons, muskmelons and grapes.  He was especially popular with the neighbor children in the area.  They loved visiting with him and were thrilled when he would send them home with fresh hot-springs-grown produce.

Croats died in 1906 at age 66.  He was buried in the Sweet Cemetery, marked by a fine headstone that can be seen today.

The next owner of the Hot Springs appears to be Brian Neilson.  We know, at this time, Neilson built several cisterns trying to control the springs and bring the water to a point where he cemented a big catch basin.  After the catch basin, later renamed “the Hot Hole,” was in place, he built the swimming pool.  This same swimming pool is the one that is still used today.  The many rocks patched with mortar can plainly be seen in the dressing rooms at the base of the pool -still holding strong over 100 years later.

Time-saving people would come to the springs to swim as well as do their laundry in the hot water.  A photograph from 1909 shows the west side of the pool set up with barrels to wash, a clothesline to dry and a homemade wheelbarrow (still in existence) for hauling the heavy laundry.

In addition to the pool, a house, as well as a large screened summer home were built. 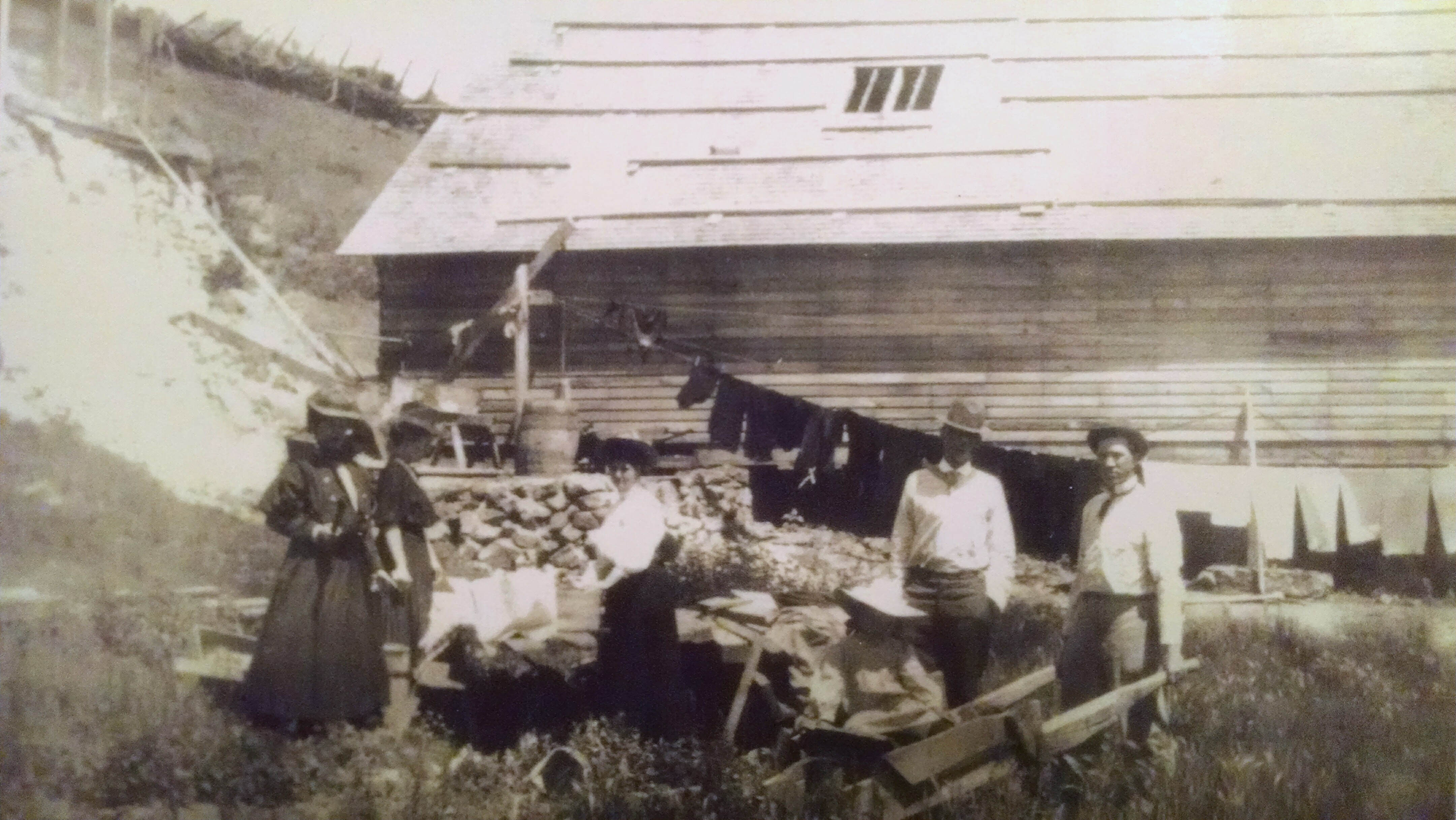 The next owner of the hot springs appears to have been Dr. Alfred Skippen (related to local Skippen family in Sweet).  He purchased the springs in 1914 and we were lucky to come across his life story summarized here:

Alfred Skippen was the twelfth child in a family of thirteen children.  He was born in 1859 on the Canadian side of Lake Huron.  When he was barely able to walk, he wandered outside and stepped into a pile of ashes just removed from the woodstove.  His heels were completed burned off as well as his toes, only bones remained on the bottoms of his feet.  This horrible accident resulted in him being unable to walk until he was 17 years old, and only then with special shoes filled with the softest of lining.  Once able to walk again, he was finally able to attend school, and started 1st grade at age 17.  He was an excellent student and eventually became a country school teacher and then a doctor.

Later with a wife and 4 children, Skippen was struck with the dreaded consumption (tuberculosis).  He was told that he might be able to live a few years longer if he moved to a higher dry climate.  He heard of another man who had been able to recover after moving to a distant place called Payette, Idaho.  With no other choice, Skippen boarded a train, leaving his family behind.

On the course of the 3,000 mile journey, he was suffering so badly that the train attendants were afraid he would die on their train and so they abandoned him at a stop in Nebraska.  An unknown stranger found Skippen and brought him to a hotel where he recovered enough to continue his journey.  He arrived at the Payette train depot in 1899 where he was met by a woman.  She asked if he was the consumptive relative she was waiting for.  He was not, but when the other didn’t arrive, she instead took him home to recover in a tent in her backyard.  The high dry air did him good and he sent for his family to join him.

He soon had a booming medical practice.  However, the many mosquitoes by the river brought him Malaria, so he sought even higher, drier air and eventually found his way to the Sweet/Ola area.  Here they homesteaded 150 acres and in 1914 bought Roystone Hot Springs.

An advertisement from 1919 placed by Dr. Skippen and (now unknown) W.H. Day in The Hotel and Travelers Journal: Volume 87 shows the great plans he had for the Hot Springs. 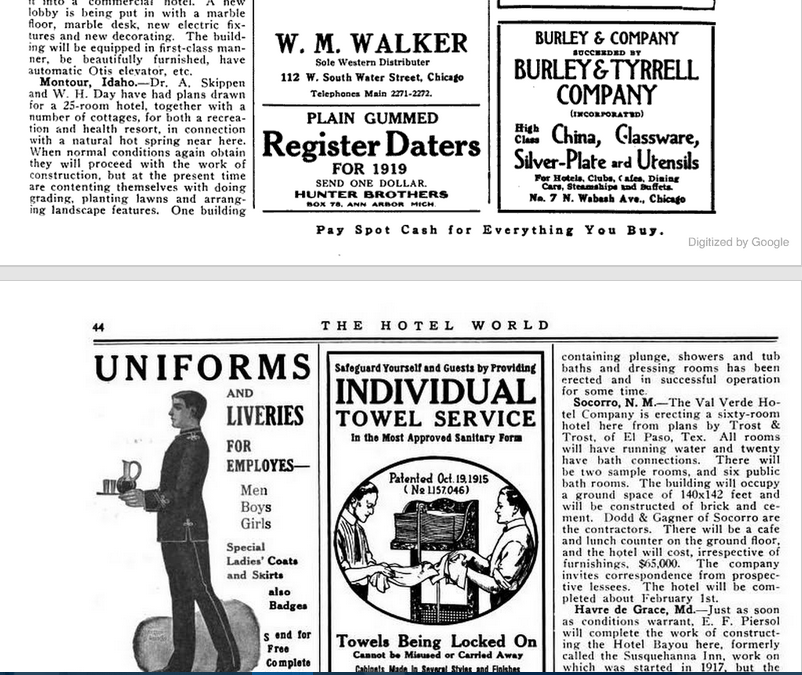 “Montour Idaho – Dr. A Skippen and W.H. Day have had plans drawn for a 25 room hotel, together with a number of cottages, for both recreation and a health resort, in connection with a natural hot spring near here.  When normal conditions again obtain they will proceed with the work of construction, but at the present time are contenting themselves with grading, planting lawns and arranging landscape features.  One building containing plunge, showers and tub baths and dressing rooms has been erected and in successful operation for some time.”

Unfortunately, that same year, Skippen had a near fatal encounter with poison ivy.  He was forced again to leave his family and was sent to a sanitarium in Portland, Oregon in an attempt to save his life.  During the months of his recovery, he made up his mind to sell everything in Idaho and move his family and practice to Portland.  In the Fall of 1919, he sold the Hot springs to a fellow patient in the Portland Hospital.  The new owner’s name was Roy Stone.

Not much is known about Roy Stone, other than his poor health.  It was in a sanitarium that he and his nurse, Eva Roper, fell in love and married.  As his condition worsened they became increasingly desperate to find a way to improve his health.  When they heard of the healing hot springs in Sweet, Idaho, they jumped at the chance to purchase it.  The couple readied their lives to make the move in hopes that the thermal waters could provide Roy with what he needed.  Sadly, shortly before they were to depart; Roy passed away, leaving Eva and her son heartbroken.  They made the journey alone and named the hot springs after a man who would never see it.

Not long after their move, the main house at the hot springs burned down.  Eva, then proceeded to build a 7,000 square foot sanitarium in its place.  This building is the main house still standing at Roystone Hot Springs today. 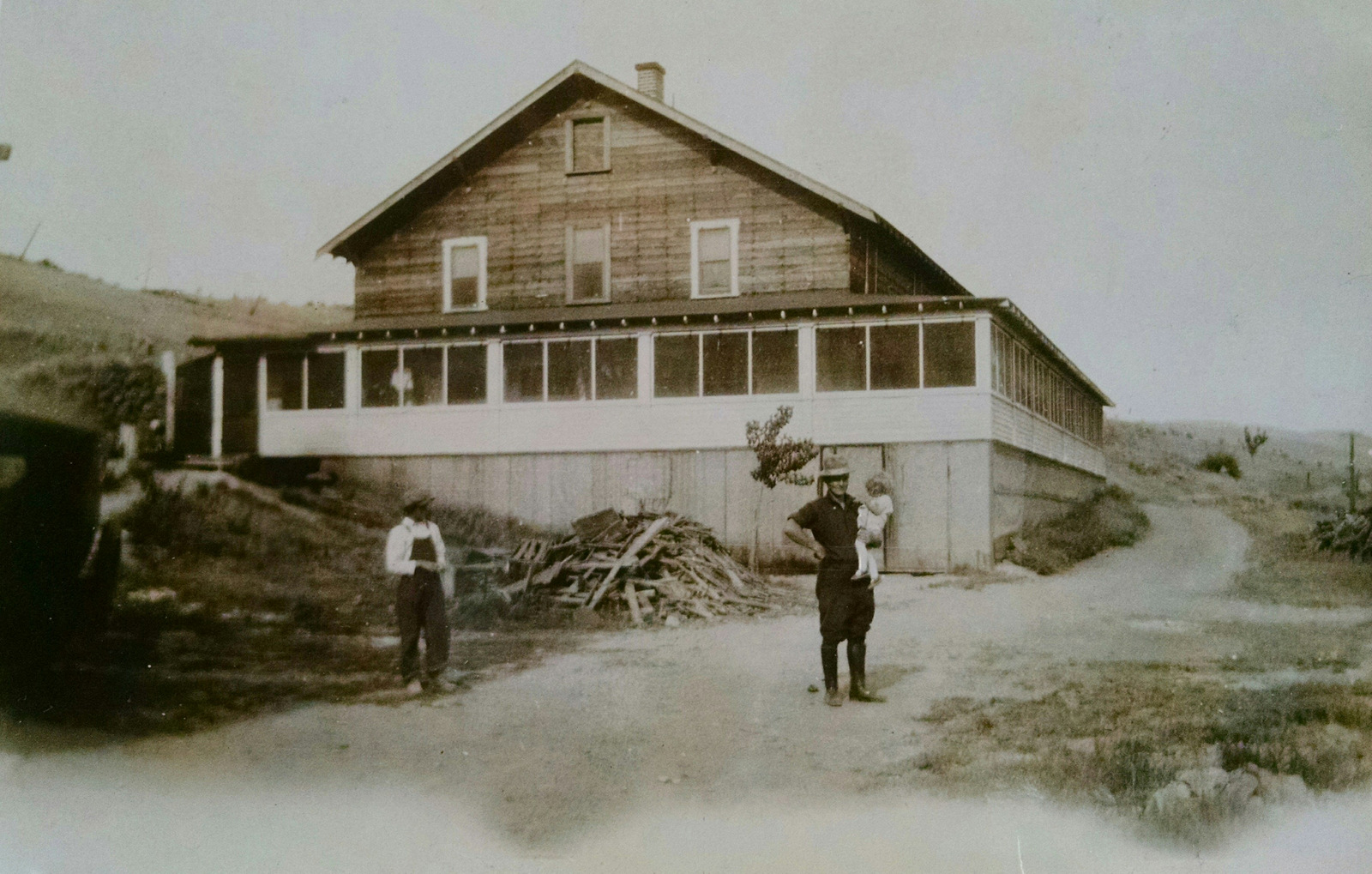 Called the “Sweet Sanitarium,” it had a 20’x50’ living room that was usually filled with guests playing cards or just visiting.  Upstairs, it was built much like hotels of today.  One long hall all the way through, with numbers on each bedroom.  It also included one bathroom in the middle of the hall.  For the convenience of the guests, under each bed, a chamber pot could be found.  A young neighbor girl, Jamie Chilcot, was paid to be the Sweet chamber maid. Every morning she would clean each room and empty the chamber pots into the hall bathroom.  Each pot was then sanitized and retuned to it place beneath the bed for use that night.  The young girl’s other duties included maintaining Eva’s prized hardwood floors.

When the town of Sweet burned down the first time, so did the dance hall.  Eva responded to this disaster by opening up her ample living room for dances.  But the first night of the dancing resulted in the scuffing and dulling her beautiful floors.  Eva’s solution to this problem was to move the dances out to the large screened summer house.  This worked wonderfully for a time, but it was lit only by kerosene lanterns, and before long, the summer house burned down too.

Eva was known well for being a wonderful hostess and loved having her sanitarium a social center of the community.  In 1929 she placed an advertisement in the Idaho Statesman.  The ad boasts famous chicken dinners and mineral waters that will cure everything from rheumatism to stomach trouble.

An obituary featured in the December 1933 Index Newspaper states:

Mrs. E. A. Stone Passes.  A heart attack caused the sudden and unexpected death of Mrs. Eva A. Stone, owner of Roystone Hot Springs near Sweet.  Friday morning, soon after awakening from her slumbers, she called her son and requested him to bathe her throat with hot water to relieve her of a choking sensation.  He left her to get the water from the kitchen.  When he returned he found that life had flown.  She had been a sufferer from heart trouble for many months.

Mrs. Stone came to Idaho from Portland almost ten years ago and purchased the hot springs sanitarium.  The building was improved and completely furnished.  Soon afterward fire destroyed the building and its contents.  A new building was then erected.  The medical qualities of the spring drew many seekers after health in its waters.  Mrs. Stone was 65 years of age.  She is survived by one son, William Roper.  Funeral services were held Tuesday and burial was in the Sweet Cemetery.

We now come to a gap in our history.  We know that Eva owned Roystone Hot Springs until her death in 1933.  We also have heard many baby boomers tell of the fun they had swimming at the springs when they were kids, but we haven’t been able to find names of the owners.  We know that there were several owners and the property changed hands often.  If you have any information -we would love to hear about it!  This unknown gap spans a period of about 50 years.  Although the pool was operational for this time, everything, especially the Sanitarium fell into great disrepair. 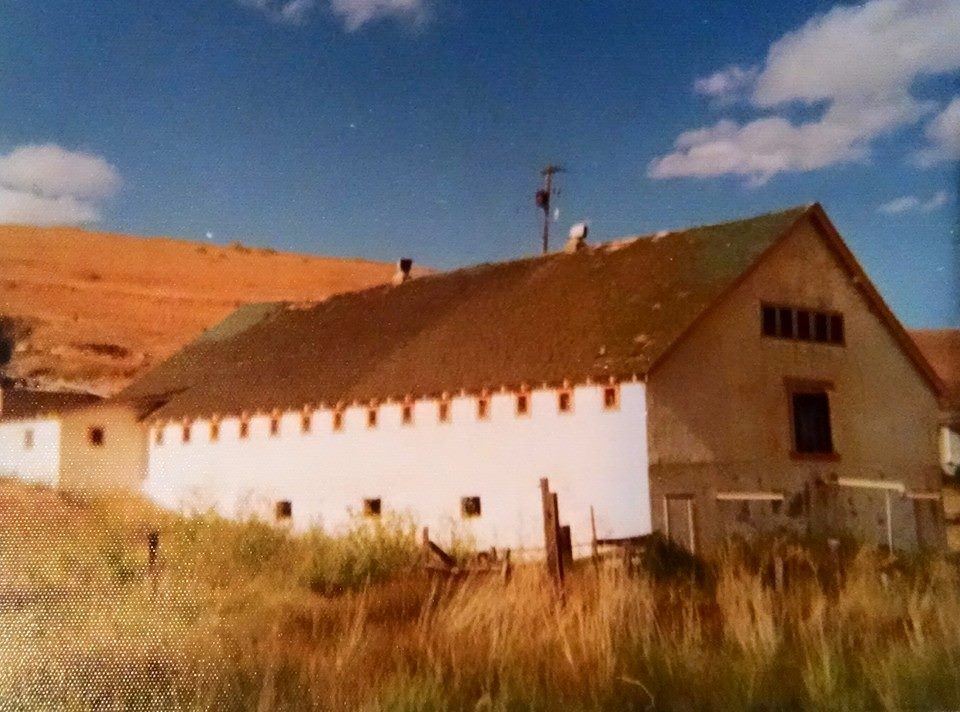 In 1979 Roystone and the surrounding 23 acres were purchased by CPF-3 Incorporated.  Originally planning to develop a commercial sized alcohol plant, they soon decided that a state-of-the-art Geothermal power plant would make better use of the low cost geothermal energy.

At this time, Louis and Ella Mae Johns, began to take an interest in the property.  They became  investors in CPF-3, and along with 5 others, worked to get grants for drilling geothermal wells.

With the discovery of springs of nearly 160 degrees, their plans looked promising.  However, funds were short and in the end, Roystone Hot Springs was put up for auction at a Sheriff’s sale.

Louis, not wanting to lose his money already invested in the springs, decided to buy it with the help of his business, Johns Plumbing.  It has been family owned and operated ever since. 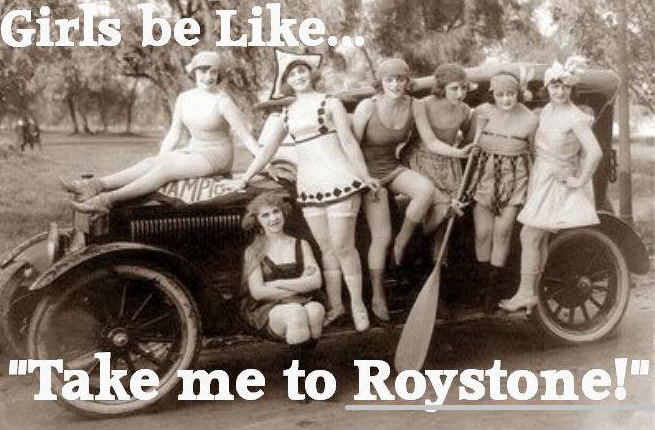